Meeting place for Flames of War in Canada

Just back in from a looooong drive from Calgary.
The Regiment guys put on a great event and I managed to bring back some hardware again this year. 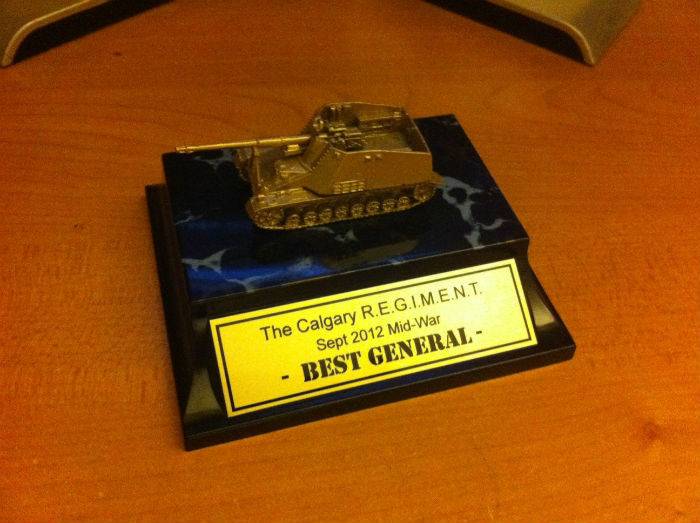 I brought my Guards Strelk this year (just managed to get it finished the night before we left).

Four deployments and 1625 pts on the nose.

Some quick details on the games played.

1) Break through VS Adams Panzer Grens. (I defended)
Always an interesting mission for my Strelk. You really need to focus on getting your objectives covered fast without losing too much infantry in the open. I managed to get the big Strelk with Pios dug in on the closer objective on turn two. As Adam had massive amounts of mobile MG's around, I decided to contest the farther objective with my KV-85's, 76mm direct, and 122mm templates. I managed to nail all of Adams AT guns (PAK-40's and 88's) early with the arty and direct firing 76mm (some amazing roles on my end). This left my KV-85's free range to terrorize the rest of his forces. Adam seemed to be cursed by his dice all game.
6/1 for me (Amazing dice helped allot).

2) Dust Up VS Brad's Italian Bersag.
Open desert board and a hard scenario to win for either infantry list.
I dug in where I deployed (Brad did the same) and prayed for quick reserves. The Bersag platoons are dripping with gun teams who can easily pump out 20-30 shots per shooting turn. This forced me to lean heavily on my support again to get things rolling. My GOW and KV-85's managed to snipe his 88's early which left my KV's free to drive through his barb wire and shoot/assault there way to grabbing the far objective. Again my dice stayed really hot all game while Brad had bloody awful luck a couple of key turns. Brad was a real sport when time was called. I had the far objective uncontested...but he had some Pios rolling up that could have given my Kv's some grief. A few more minutes could seen the epic of his Pios fearlessly assaulting my Russian heavies.
6/1 for me (again with the hot dice).

3) Fighting Withdrawal VS Bojan's Italian Bersag. (me Attacking)
Bloody auto defending Italians again! Bojan and I have faced each other on the leaders board before. Last time (Vancouver 2011 LW Tourney) he beat up my Attacking Grenadiers with his Bersag (netting him Best General and me Best Overall). He is a very experienced tourney player and manages to attend most tourneys in Western Canada and several stateside as well.
He placed his (permanent) objective in the center and I put my two on each flank. I looked at the board for a couple of minutes and decided to load up the left flank and go for a turn five bum rush. My Kv's followed my big Strelk into the left flank and my GOW and short Strelk deployed centrally.
I chose the left flank for a couple of reasons.
1) Hill to advance behind.
2) Objective was in a large wood which is exactly where my Strelk would be most at home assaulting all those damn gun teams.

My infantry advanced forward and tried to limit where his ROF 3 88's could ambush from and generally screened my KV-85's.
Things mostly work out. He was forced to pop his 88's right in front of my big Strelk to get at least one turn of shooting. Three close range AT-13 hits on my FA9 KV's (exactly average rolls on the Hull down trained tanks). I expected to lose one and possibly have another bailed....but once again the dice gods gave me some love and I came through unscathed.
The rest was pretty much a grind fest with my Strelk taking huge damage while destroying his Bersag platoon and assault guns. Flamethrowers and Pios really came through for me. When the dust settled, I was testing my big Strelk. Fearless + C.O + Kom meant the Strelk stayed on the Objective and Bojan was unable to get his Pios into assault quick enough to contest.
6/1 for me.
Great game that was allot closer than I have described here. After the game Bojan and I (as usual) picked out our respective errors and laughed at how the dice luck swung back and forth. I was way too cautious with my KV's (damn ROF3 88's!) and Bojan realized he needed to reinforce the left flank right from turn one.

sounds awesome! wish i could have made it out

sounds awesome! wish i could have made it out

I think you guys would have had a shorter drive than us.
Might fly next year.

Anyway, the Calgary guys are always a hoot to play with.

yeah most likely a bit shorter for us, yes I played in a tourney with some of them and they are awesome guys to play. we really are planning on making some calgary tourneys its just getting the times lined up with everyone to be able to carpool out